The struggle of towns and resupply is big on this trip. We don’t know what any town will really have and sometimes we have to just really hope they have a market as we’re out of food. Because Lic didn’t have anything we could resupply with we walked a couple extra miles on the road to Fuzine to resupply and grab some food to eat. Croatia is still just so bazar to me. No restaurants, very very limited markets, and the choices at the markets are even more limited. As a tourist in the moment it sucks, but as a way of life it’s totally what I want some day. These people live off of their own gardens and the land around them and what it provides. It’s so beautiful and amazing, but sucks as a hiker. Leaving town we met 3 men who were doing a Pilgrimage in Croatia. The Priest was with them and they were all super kind and we took a picture together. It was a small moment that meant a lot. Just to be with others who were doing something similar after feeling so alone out here was nice. We got to summit Bitoraja from the town of Vrata. Another mountain with some amazing sea views. I can’t believe how close we are to it! On our way down to Celimbasa, where we planned and hope to find camp, we saw multiple bear prints and some poop. The road was quite muddy, and looked exactly like Nutella, so the prints were very noticeable. Knowing they were near we knew we shouldn’t be quiet so we don’t frighten them, and nature just helped us with that automatically. All the sudden the decent mud turned into thick quick sand mud. With each step all the sudden we could no longer see our feet and the mud was creating a suction which made it hard to get our feet out. It was so hysterical. We were laughing so hard knowing there wasn’t anything we could do so we just kept going. The mud was all in my shoes and all over my legs. That night we slept in more tall grass, but had a beautiful sunset. The next morning helped me clean up as we got to walk through what I call natures car wash. Tall plants overgrown on the trail that were wet from the rain clean you up real quick. This morning was really foggy and we got to walk on a beautiful forest road through a meadow. I felt for a moment like I was on vacation. Just taking a morning stroll, which I guess is technically what I’m doing. The mellowness of the meadow and road lasted a couple of hours before the most adventure I ever had on dry trail began. We summoned Samarski Stijena, Stijena means rocks, first. These mountains are covered near the top with large white karst rocks that shoot up towards the sky.  Beautiful for sure. Comments from other hikers let us know it would be challenging but rewarding, I guess we just didn’t really get what that meant. Soon we were doing a lot of rock scrambling which is super fun. That soon because more of a rock climbing journey. Then trying to pass through super small cracks with packs on. Getting stuck. Then having to toss our packs down rocks and climb down. It doesn’t help that the pack is in the way but it also throws your balance off a bit, you may start falling forward when you really don’t want to be. I don’t like heights. They terrify me. So today I had to face those fears quite a bit. We’d follow the trail markers and I’d walk up and just see a straight drop down with the only path being to find little places in the rocks to grip with your fingers and place your feet as you slowly descend. There were ladders in a couple places. One hovering above the ground only being held up by some twisted wire. There was at times also stakes to climb up the rock with leading onto the next rock mountain of, Bijela Stijene. As well as wires to hold onto as you just walked along the side of ridges. Here is a quote from the VD Alliance about what we went through “The site of Bijele stijene is also a genuine gallery of karst forms: everywhere around, there are numerous, vertical, white, approximately fifty meters high pointed rocks in the terrain, with deep impassable sinkholes and swallow holes hidden in between”. So it was a fun, stressful time. Even though I was scared during parts it was my favorite day so far. And the views were pretty epic. Meg and I laughed when we checked the trail registry and saw what other hikers had written about the trail. “Dear God, someone hold me” and “whoever created this trail deserves either an award or a jail sentence.”  Those 2 were my favorite. It made me more interested in rock climbing though, just preferably prepared for it and without a pack on.

The next day just started with me falling more. I ended up just walking barefoot. My shoes keep no traction on the mud and wet rocks, which is all the trail seems to be since it rains every night. Luckily my pack braces my fall for me a bit. The biggest deal with this day was just continuously getting off trail. The gps would show us on trail then a bit later we’d check and we’d be way off. Missing some random bit of overgrown trail we were supposed to get onto. I feel more attached to my phone now than I ever have. We always have to be staring at our GPS to try to not backtrack over and over again. It won’t have main roads on the maps, but super old roads nobody has used in years. I get anxiety whenever one of us is checking the maps not knowing if we just walked up the big hill for no reason or not, most typically it was for no reason. Just confusing. I have come to the conclusion that Croatia and I have an unhealthy relationship. You know, those relationships where 85% of it is total shit and you don’t like it, but there’s that small 15% of hope that keeps you hanging on. That’s it. I see great views and forget about all the shit it took to get there and all the shit that will come after it. I definitely don’t want to quit, my ego is too big for that. But I don’t really like this “trail” so far. But I think we’re going to continue learning and getting the hang of things and will be able to make it special to us. We got to have lunch at a sweet hut built into some cliffs, before more bad trail. But then we took a fire road instead of trail into Krvi Put which was so perfect. We were walking along the lower part of green pastures along the mountains with windmills and the sea just down the hill beside us. Idk why the trail wouldn’t just take this amazing route.

The nights on trail have also been interesting. Not just the consistent thunder storms, but all of the wild boars. It seems anytime we’re in the forest we hear them walking around the whole night. Luckily they never bother us, and I think I’m used to them now. Once I realize it’s not a bear I just go back to sleep. But what seems to frighten me most is how many gun shots we hear. Assuming it’s hunters hunting the boars. But it’s kind of sketch as we don’t want to be camping in the “fire zone.” We will be fine though, it’s just funny how your mind can freak you out so much.

Currently we’re in Senj on the coast. Spending a couple days relaxing in the water and watching Croatia play in the World Cup finals. We don’t want to miss the opportunity to be here in a town if they win! And it’s nice to be off the trail actually feeling like we’re in Croatia on vacation. 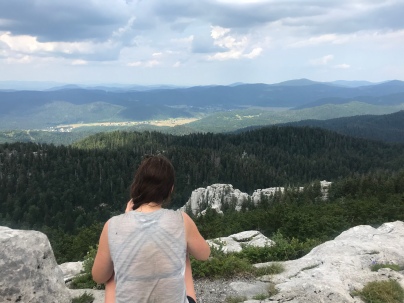 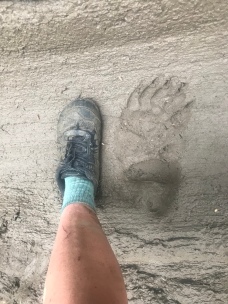 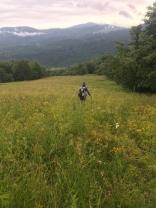 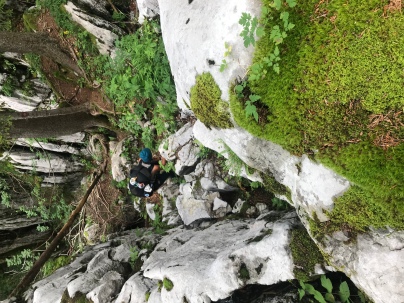 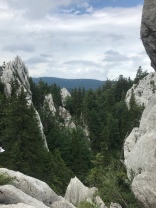 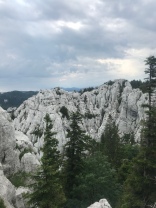 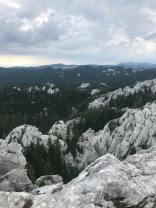 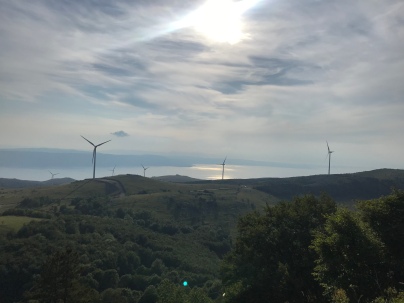