Day 55: so our surprise last night for Hefty was that we carried out the ingredients for one of his top beverages..white Russians. We had Kahlua and Vodka, and for the creamer the little tiny creamers you get from a gas station. We’re hikers it has to be light. We put the booze in light plastic fuel holders haha. It was great. He used some snow to make it legit. We got up and going about 6:00 I think it was. The other half who camped on the rocks a bit back planned to meet us at our camp at that time. And then we were off. The good news is that since we did 2 passes yesterday, Kearsarge and Glen, we don’t have to do one today. We will just hike the miles to the base of the next pass, Pinchot. Which actually has a great water source, legit camp sites with bear boxes, and a suspension bridge. I love this group! They’re all so magnificent. I also realized I’m eating a lot. I have put all of my faith into the fact I believe VVR will be open so I will be able to resupply before Mammoth. So I’m eating like it is going to happen and hopefully it does. But even though we’re walking fewer miles they’re so much more strenuous and our packs are heavier so we are more hungry. This is traditionally the part of the PCT hikers really drop some weight. So the trickery for the day was the river that sent Freckles and Tim back to us. On the way there we met another group of people who were heading back also. Freckles had met them the day before and one of the girls decided to come back with us. She ended up just staying with us for the day. So we get to the river and we all part. Some to scout out the situation and go upstream a bit to see if there’s a snow bridge we can cross. And the rest of us…..well to go poop. It’s not easy out here. You can’t just go whenever you want. Because one there’s typically a ton of snow, and you can dig and poop there but not ideal, and two because you don’t want to lose the group. So knowing we’d all be stopping we all went about. Trying to yell as we walked to make sure we don’t walk into somebody else. So then I believe it was Simon and Tim came back and found a legit snow bridge not too far upstream. So yay! What we thought was going to be a horrible time ended up being a breeze. Then we continued walking and soon found ourselves walking across probably the sketchiest thing I ever have. A big frozen lake. We split up, in the sense we made sure we had about 200+feet between each of us, similar to avalanche safety, just Incase anything we’re to happen. It’s scary. You want to walk slow and carefully but you also want to sprint and get it done. The worst was we heard a big cracking sound during part of it. And we all stopped for a second…..phew nothing. Kept walking. And we all made it!! And then we actually found the trail! To actually see it is amazing! We kept walking not sure what we’d find at the campsite since these days you typically can’t even see them because they’re covered in snow, but this…this was perfect. It was huge and open and dry! And had fire rings and bear cans! What a win! We sit for awhile hanging out drying out our stuff as we set up, and basically having a photo shoot on the bridge, and I really remember a killer shot of Russ but can’t find it. Then more and more hikers come. I can’t remember all of their names but there was a good 10+ more hikers that came at some point. One was straight up rude and just took over our fire when we were about to put it out to go to sleep. Not a huge deal typically but some of our group was camped right next to it. Our plan was to just do family dinner then get to sleep. But this hiked, who shall remain nameless, kept yelling and inviting a ton of people over and just talked and yelled and was obnoxious. Even after being asked numerous times to quiet down a little, put the fire out, etc just kept doing her thing. It was legit the first time on the trail I was disappointed in another hiker. But I’m excited for tomorrow and what it will bring for us! 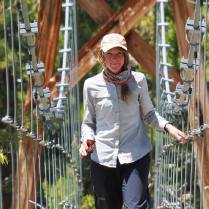 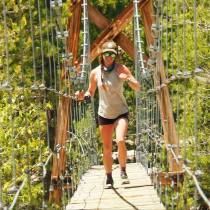 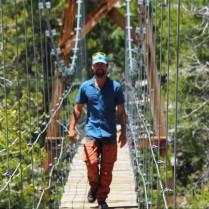 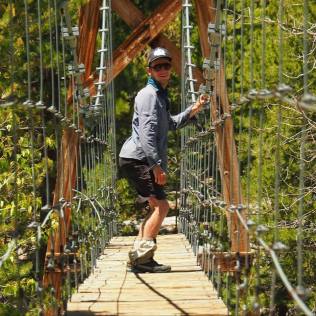