Day 70-71: well these short 7 miles into Lee Vining have been anything but easy for poor Tim. He keeps getting really light headed. Freckles is a winner of a girlfriend. She straight up just took his pack out it on her front and started walking. Scotty helped her while Stats and I stayed back with Tim just trying to chat and make sure he was ok. The simplest thing would just fatigue him instantly. (This was actually from the afternoon hike yesterday) this morning we got up to go and Tim wasn’t quite ready. He needed more rest. But we’re just a couple miles to the road. Me, Scotty, and Stats head out to try and get a hitch. The road walk is actually nice. I mean there’s a creek and tons of trees, and it’s closed so we can go all over. We wait for quite awhile at the trailhead but a lot of people were just coming in, and idk why I say a lot of people when we only saw a couple. Finally a guy who was there to find specific birds to photograph offered to give us a ride to the lower trailhead where there were more people. So he did, and then we waited there…..for hours. Nobody would pick us up. It’s so frustrating. If you’re leaving you’re going where we need to go. And ugh it’s so frustrating to see vehicles that are totally empty like come on….and of course this adorable hippie girl pulls over but her car is too stuffed with things. So we just wait more….and then watch Tim and Freckles ride by in their hitch. At first I was jealous, but Tim needed to get to town more than we needed to so that was best. Finally we got a ride. The guy immediately told us how bad we smelled. Haha. Then we found ourselves in Lee Vining. We immediately go get food, then head to the local coffee shop to get some WiFi. Freckles and Tim hitched into Mammoth to get Tim to the hospital. After sitting for awhile and being bored, the guys were doing stuff on their phones, I decided to go walk around and talk to locals. To see if there were any trail angels or info on where we can stay. And good thing I did! The Presbyterian church lets people stay there sometimes. Apparently a group of people biking from Texas to Alaska stopped in the other weekend. So I went to meet the pastor who showed me around. We basically get our own space, a big back room that has a room where we can sleep on the floor, a full kitchen, a ping pong table, and A SHOWER! This is the greatest. So I went and told the guys and we headed there. I was so grateful this was seriously the best thing. Then we went to the Mobil gas station for dinner. Now as weird as that sounds it was literally the dopest and most amazing Mobil ever to exist and the meal I had was one of my favorites of the trail. This place was popping. Live music, beautiful views, and a huge green lawn. I will legit go back there just to go to the Mobil station. Dinner was really fun with the guys. While we were here we also met Jitterbug and she ended up coming to the church also, and later her friend Snitch came as well. Jitterbug is going to head out with us for this next section so she doesn’t have to wait for people coming from the valley. This next section has I believe like 8 huge water crossings….that number is probably not accurate but we had a lot. Recently our friend Strider posted a video of his group trying to get through and they couldn’t. Part of the trail looked like a beach, and bridges were totally washed out. We will see how this goes……Tim has been diagnosed with Giardia. Coming from some untreated water he drank. They gave him a bunch of IVs then a couple pills to take only once. And he should be good to go tomorrow!! 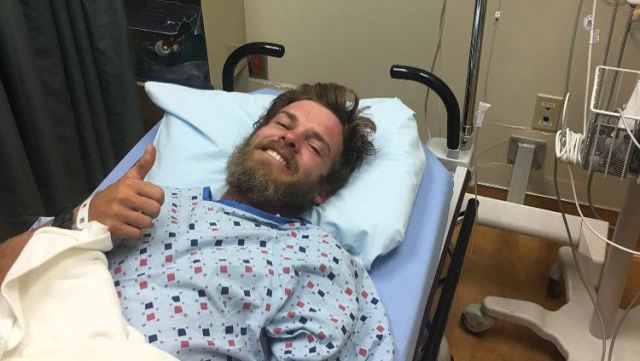