Day 83: good day overall!!! I forgot to mention some very important moments from yesterday. 1) we actually got our permits checked by a ranger. And we were excited because we have to carry them and it was the first time it mattered…well except getting free pie in Julian. 2) as we were walking Freckles ran straight into a tree branch that was hanging and fell back into me. I slowly lowered her to the ground not knowing what happened but she ended up being ok. It happens with a cap on though when you’re looking down, you miss things sometimes. But it for real made me nervous. 3) Scotty decided to do some HILARIOUS stunt work while we hummed the mission impossible song. He went jumping and climbing over trees and at one point ran and belly slid on some snow going face first into the ground. We all died laughing. So funny. So today initially the plan was to push to Squaw and camp under the ski lifts where we knew there would be a good view. We did about 20 miles today and ended some what early. We hung out at Barker Pass for a little this morning, eating peanut m&ms and chatting. We did our big climb for the day and it was semi sketchy. Going up on snow and around slippery rocks. But we made it and decided to take lunch at the top. Yesterday I realized I had lost my spoon which is a HUGE BUMMER! Our lunch spot kinda sucked. There wasn’t any water except for some snow melt. Scotty went and dig a bit to get more water but it turned super brown. I am so grateful for my sawyer!!! That water came out crystal clear. But we still couldn’t get a lot of it and we were all super thirsty. When we left 2 other hikers were passing and apparently one had found a spoon on the trail! Not mine but an even better and nicer one that she gave to me!!! Winning!!! Today was a little off in a sense that sometimes, since were in a group always, someone wants some space. And today that was Freckles. She just wanted to have her headphones in and do what she needed to do. And I get it. We all have those moments. We were walking prepping for our large climb to the ski lifts when we passed a really nice flat spot with fresh water. We all decided we had the energy to go up, but there is water here and it just makes it 15 miles tomorrow to get to Donner Pass. So we just camped there. It was a great spot. Lots of greenery and a couple of flowing streams. 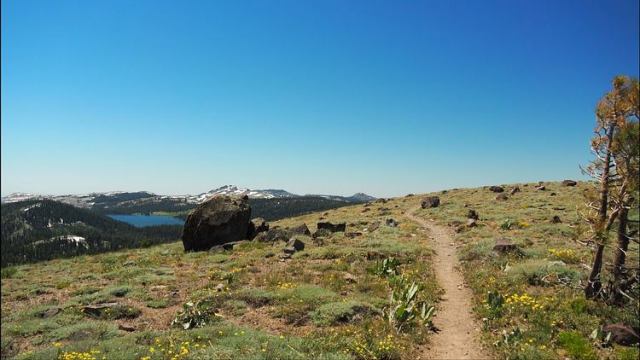