Day 155- The Last Day of the PCT: it was another cold night but I definitely slept better than the night before it. Maybe because I was so tired from not sleeping or because I was in between people, where those on the outside seemed to get the worst of it. We got up slowly not really wanting the day to blow by. We had hoped to all be together and eat lunch and everything together today. It was another day of chilly weather, but epic views. We had a small uphill to the peak of Woody Pass. By this time we were spread out a bit, which is super typical on uphills. So I stopped at the top with Dash while we waited for the rest of the crew before heading on. It’s crazy to be looking out from points and know that it’s Canada that I’m looking at. We don’t all stay together long it’s a challenge today for some reason. We did meet up with the Pacific Northwest Trail for a bit which was cool! Not knowing where the others were Dash, L-Train and I stop for lunch at the top of a hill. There was a handful of other hikers there who are walking back down to The Pass because they weren’t going into Canada. I think that would be really hard. To be done with the hike then still have 30 miles back to walk. Does it make the finish less celebratory I wondered? We chatted for a bit, tried eating in kind of a lowered part sort of like a ditch to block wind. But it was just too cold so we gave up waiting and packed up. I don’t remember when it was but they caught us. There was a storm coming which is why we’re trying to finish today. I definitely don’t want to be stuck in the North Cascades if a gnarly snow storm comes. As we were finishing up the last few miles it started to drizzle. I was walking back with Tim and Freckles when I decided to run to the end. We still had 8 miles to walk into Manning Park. I arrived shortly after L-TrAin, Dash, and Hefty. We took photos of each other on and near the monument when Tim and Freckles arrived. We took group photos, ones I will cherish the rest of my life. And then no crying, it actually all felt super anticlimactic until we started hugging each other. And when I gave Meg a hug, she said “we did it” and that did me in. I just started crying. I couldn’t really stop. But now The big moment! The proposal was about to happen!!!we chat for a min then tell them we need pics of them at the finish. I take their GoPro and Dash I think was shooting on one of their phones. They took some goofy ones. Then Tim, with an audience now As 4-5 other hikers have arrived. He told her how much he loved doing the hike with her, and lots of mushy stuff then he just hugged her. And we were all like WTF? Did he chicken out?!? She was starting to walk away, the GoPro had died now, and he grabbed her hand and said an inside joke the 2 of them had about him proposing in a grocery store while resupply. And then dropped to his knee. It was so cute I was basically just continuously crying from before. It was such a good day. We signed the log book then headed on. Tim and Freckles were camping at a campsite shortly up and planned to walk in tomorrow so the rest of us went off. We just chatted as we hiked on some not too well maintained trail, dirt roads, then asphalt. We arrive to Manning Park and immediately go to the restaurant to eat a bunch of food. It was super good, but omg so hard to walk standing up from that chair.Us, and all other hikers we saw had an insane hiker hobble going on after getting up from dinner. We saw Squarepants too! Then we headed to shower and sleep in the room downstairs they leave for hikers to hang in. We also get free access to the pool and got tub! So this is it. The trail is done, for now it just feels like another town. Another 0 day and in a day we will be back on trail. But we won’t. So now what?! Stay tuned for tomorrow where I am going to write my “farewell” letter that I journaled as a goodbye to the trail and my family. 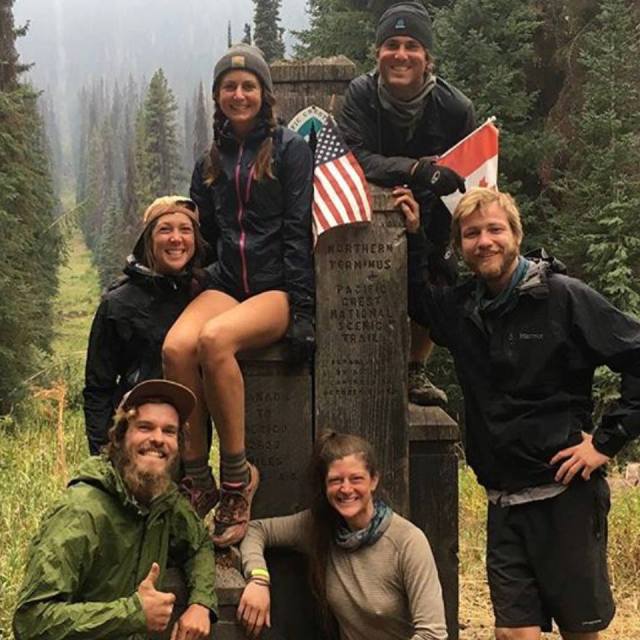