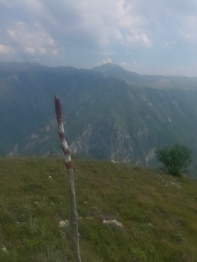 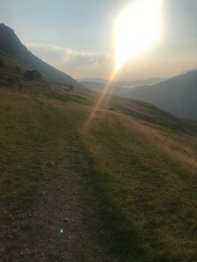 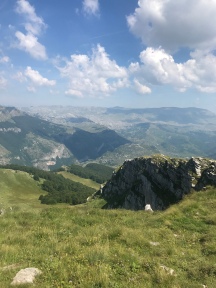 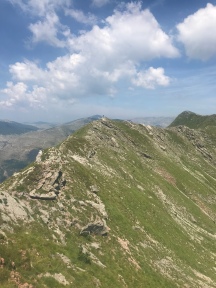 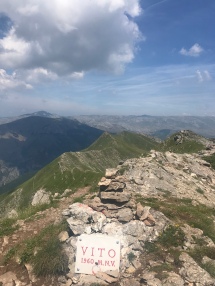 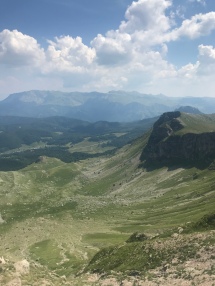 The trail since our long break in Mostar has overall been positive and in my opinion quite exquisite. I’ve made it a point to agree to myself that I won’t complain about the trail as long as it is well marked making it easy to follow. And mostly it has been, so that’s a win!the hike out of town was a good gravel road/bike path to Boracko Lake. My body felt achey and tired this day, possibly from a long break, a really heavy pack, or maybe I’ve come down with something? I don’t sleep well in towns, I find myself fixated to screens and being able to do things I’m not able to out on the trail and kind of binge on them. Definitely a typical habit for me in many aspects of my life. So possibly the lack of sleep from that and eating bad food just made me crash a bit. A couple hour break swimming at the lake was quite pleasant. It began raining before we left luckily only lasting a short period before we headed out a couple more miles to camp at a more peaceful spring. The next day my energy wasn’t much better. Feeling continuously wiped. We did about 18 miles of which at least 16 were uphill. It was just a never ending uphill battle today. The morning climb was tough and I got crazy sweaty. My shirt, buff, and shorts, all soaked like I jumped into a lake. But it was a rad hike through the canyons! After the next uphill we had to go on quite a search for the marked spring. There was an arrow up so I followed up a bit and never saw anything. Neither of us had much water, and Meg was quite dehydrated so we had to find some. Luckily, with 2 of us we were finally able to spot some markers that led us to a small natural “well” where I could dig out some water. After that Meg took a short cut on a road while I followed the Via Dinarica path through a nice cool forest trail that led through open pastures filled with cows and onto the top of the canyon where I could just walk across the top with beautiful rocky views the whole way. I found Meg sitting under a small bit of shade under a tree before we ate lunch in the shade at the cemetery. It’s so funny to me the things we do out here. That we find it totally normal to unload our packs and dry all of our stuff out and hang to eat at a cemetery. But it just feels normal. There was nice short grass and good shade so it’s the perfect break spot. the trail continued along the ridge of the open canyon for a bit drifting in and out of the forest. The trail continued up, up, up, to the town of Lukimor. A popular tourist destination for local hiking through the canyons. And is also the oldest and highest altitude village in Bosnia. I struggled so hard the last couple miles there, but immediately found relief at the local hostel/restaurant. While waiting for Meg I hung with the owner Nrsid, who offered to let us camp out back for free. He was so kind and helpful. I knew if Meg felt anything like I did we didn’t want to walk any further at all. We ended up having a great time there. I Met a 2016 AT hiker, a rad woman who has since then yet to go back to work and has just traveled hiking around the world with her boyfriend. Nrsid brought me some Rakija, the famous homemade liquor of the Balkans. It’s strong as shit, and he brought it to me after I said I don’t really drink alcohol. And he told me it was cherry juice, haha. I had Megan finish it for me after I had just a couple sips. Slept great this night listening to all the sheep live their joyous lives all around us. A lot of livestock here!

Leaving Lukimor we got to hike through the beautiful canyon. It led us to some water mills that forced us down quite a steep downhill. I ended up slipping but my pack hit the ground first and just led me the rest of the way down on my ass. Meg just avoid the fall, sat down and sled. Basically a butt glissade, on dirt instead of snow. There is so much water here! It’s like a whole new world. A beautiful, perfect, magnificent world where dehydration isn’t a daily thing. There’s so many rivers, streams, and fountains. We had a climb to Drstva Mtn, after snacks, and since my legs were feeling quite fatigued I had to go with the counting steps method to get up. That’s just counting steps and I make myself have to be exactly at a 100 steps before I can break. Usually I make it 500+ but it’s helpful to not let myself self just stop 30 steps into a 100 step segment. The trail itself was perfectly maintained and marked. A lot of blueberry pickers also use it! I met 3 nice men at the top of the mountain, 2 Bosnian 1 Italian, they offered me beer. And we’re heading our same direction along the Knifes edge to Vito Mountain. The Knifes edge was epic, just like the one in Goat Rocks Wilderness in Washington. Just amazing. And so much fun to walk on. On the way down I had a good fall and banged my arm up a bit, but then the trail was majestic again and my attitude quickly shifted back to pure happiness.

What made this day epic is we actually met 2 other hikers who are thru-hiking the VD, northbound. The first Matt, from Belgium or Germany, I can’t remember. He actually started SOBO but got bitten by a dog in Slovenia and has had to go home every couple of weeks for more shots, so now he’s just doing sections. Later, after getting confused for a bit and losing trail we met the other hiker. Timon, aka Kermit, a 2016 PCT hiker. He had tried to summit the large mountain in Albania which is still packed with ice. And after realizing it was too dangerous he slipped trying to go back down and had a huuuuuge thrash on his leg/butt. We will be avoiding that mountain as every hiker has had to bail on it. It was so so amazing to meet and chat with other hikers, and I wish it could have all lasted longer. We all seemed to have the same feelings about the trail, it’s nice but not amazing. Glad we’re not the only ones. We camped in town, I believe it was Laura, near some abandoned buildings, again so funny how little we care about these things these days. Tomorrow I plan to wake super early and hike into town to begin hitching to get my new Xero Shoes!