Day 46: Shortest actual non-zero day. We had planned to go about 12 miles and made it only 10.5. But it felt like plenty. We dropped a bit in elevation and due to that the snow just got softer as the day went. The initial plan for the Sierras is to get up early in the morning and hike as far as possible until early afternoon then stop. That way we’re not hiking so much in the soft snow. Because if we do, it’d be much more energy and take us longer than if we just sleep and walk when it’s more frozen. Which is when I can use my micro spikes which makes everything a ton easier. So today we ended about noon. Once we came down from Cottonwood pass we hiked pass the popular and well known Chicken Spring Lake. I literally almost didn’t even recognize it as we were walking to its left. Because it was frozen and looked like most of the Sierras. Just snow. I remember the part around the lake being challenging and climbing a bit. We decided to camp near a flowing creek that we would have to cross in the morning. Meg saw on the water report that there was a log to cross on. We found it and basically set up camp right near it. Today was hard but we had lots of fun. Lots of laughs and smiles cutting the trail and boot skiing. As we sat with the fire trying to dry our stuff out it unfortunately started raining. So now I’m in my tent just reading. Optimist turtle stopped by. So crazy meeting her after seeing all of her comments on every single water source. The Scotty came. He apparently has hiked alone since KM and today had some sketchy moments where he felt he could have been seriously injured or died. So we told him he had to stay with us now so we added to our group! I’m a bit nervous for what’s to come. Apparently some girl died on Mt. Whitney a few days ago. Idk maybe I should skip and come back? I want to do this trail all out but I also just want to be safe. Will i know when to turn back? Idk I’ll see tomorrow when we get to the trail junction. Everything after Whitney even seems sketchy. 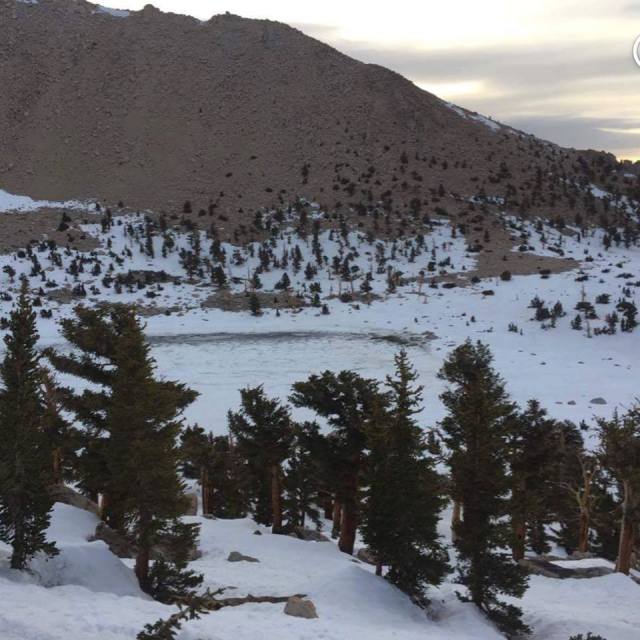