Day 117- Megan and her friend Jane came and picked me up from the hotel around 9am. She dropped us off at the trail junction by the highway and we headed on. We had planned to only do 13 miles so that Dash could catch up to us. The 13 miles literally flew by. Meg and I just chatted the whole time, and we both hike fast so before we knew it we were done. We got to the lunch/camp site and it was a shaded spot under trees. And if you walk just under 100ft down there is some fresh flowing water. To our surprise, Freckles and Tim were there. They’d had a slow morning and had stopped for a break and planned to leave. But we’re easily persuaded to stay with us and wait for Dash. 12:30 and I was done for the day. I saw Pacer today, Em and Lou came by the campsite. Then Sante too. It was like a big reunion! It was awesome. I also met SquarePants and Dusty Road, aka Fire Dick. Both were from Minnesota. Fire Dick got his name because well he unfortunately got bit by a fire ant on his dick. So there’s that story. I thought it was because he was a red head but I was wrong. Anyways super super cool guys. It was so fun to just kick it for the afternoon and everyone catch up. I did some yoga and push ups just to do stuff. And because being in Ashland I have realized how weak I have gotten. This has been one of my favorite days yet. We head a little down from where we ate lunch to where Freckles had been reading. Which was a much nicer spot as it was nice and open instead of under trees. We set up our tents kind of early because of the thunderstorm coming. It starts raining/hailing. Dash isn’t here yet, and we all just stay in the safety of our tents. Not long later Dash arrives. We spend the rest of the night all just talking while sitting on rocks and looking out into the beautiful sunset

🌅. Little did I know that until the Northern Terminus we would all be together. 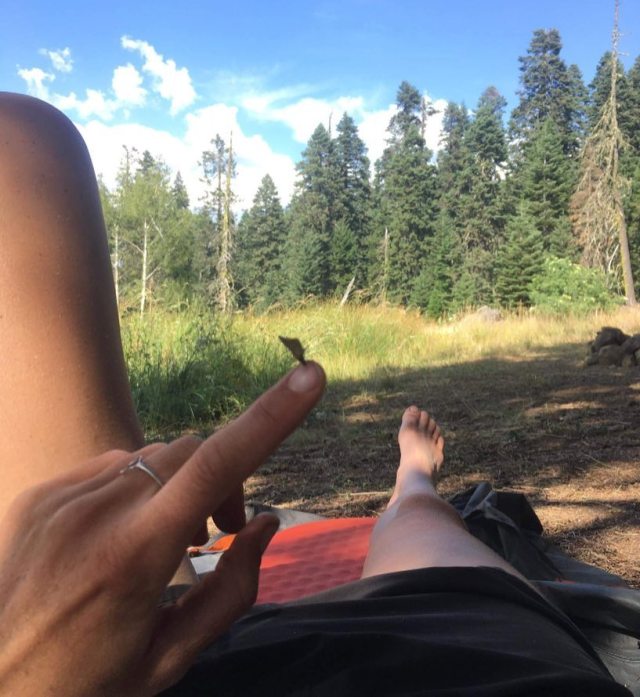