Day 147: Last night was so amazing. Because we ended up getting wet again at 5:30 we decided to just pack up and leave. We only had a quick 4 miles to Stevens Pass where we can sit inside and dry out our stuff. We giggled as we walked away in the cold morning. The miles did go by pretty quickly. Started with a short burst of an uphill, which actually wasn’t crazy easy, I was happy when we reached the ski lifts. It was foggy but again Washington was showing it’s beautiful colors. Then we got to start the nice downhill to the lodge. And I knew we were getting close when we saw DOGS!!!!! Always so exciting since I see so few on the trail. There were some day hikers out. We walked under more ski lifts and down a bike path to Stevens Pass. Nothing was open for a bit so we just spread our stuff out all along the rails and tables and hung out until we could get inside to get some coffee and food. There were some bike races happening so lots of bikers were coming around. I really loved the vibes of thanks Place. Like I legit looked at their application process to work there for a season. When they opened we went up and got some coffee and Breakfast burritos. Our group decided to hitch to the local town of Leavenworth. A Bavarian themed town that just looks like a lot of fun. L-Train and I got a hitch from a couple guys in the parking lot. When we got there…..that’s when bad shit just started happening. We got dropped off at the post office to get our packages for resupply. And after a bit Dash came. We were sitting outside with our stuff kind of all over chatting when the cutest old lady all decked out in proper Bavarian attire, she was apparently the owner of the museum in town, she walked up with a huge smile then bam. She tripped and fell right on her face in front of the doors. When she turned over there was blood everywhere. She had broken her nose. Luckily at that same time a woman had been walking up who was a nurse while Dash went inside to have someone call 911. Soon the ambulance came and she definitely had a broken nose. The unfortunate part is she was asking for a pillow for her head and I instinctively grabbed the thing I used for a pillow sometimes. My stuff sack of clothes. Which was nice, but not when a bunch of blood got all over my stuff. After the EMT loaded her up we were standing talking about it when Legit another older man walks by and bam. Trips on the curb and Busts his tooth out. Omg what is happening? After helping him the little that he allowed, I got the hell out of there. I went to the store a ways down and later walked back to meet peeps for some beer. We hung at the river for a bit, walked around, ate some bratwurst, they had a vegan one for me, took pics in funny holes, before heading back to the lodge. It was raining and I went upstairs to get a beer and some food. Dash decided to go to the nearby hostel, but the rest of us planned to just cowboy camp under an awning across the way. And I’m glad we did because that night I probably met 4 hikers who came in soaked saying they couldn’t find the hostel. The directions I guess were slightly confusing. The camping was super funny. People wanted to plug in their phones but the outlets were up super high. So Hefty and Tim were crawling on each other on picnic tables to reach them, and it was a success. The concrete was hard and the lights never went off, but I slept pretty damn good. The buff is a life saver for protecting your eyes from light. 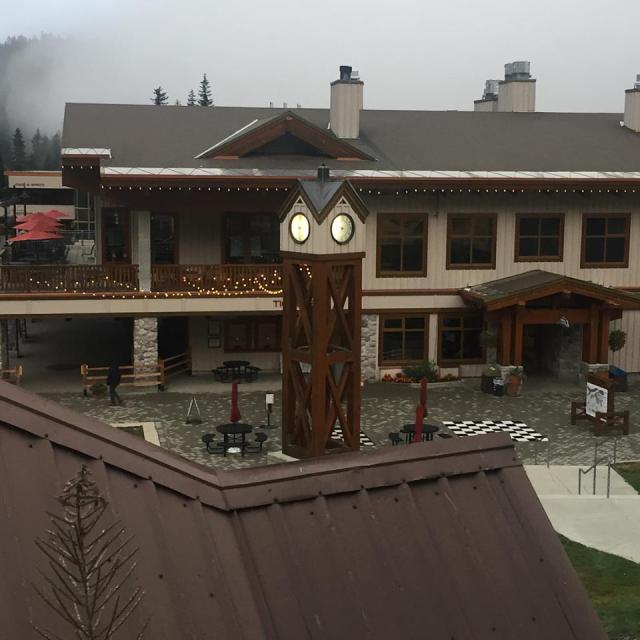